Progress during January in preparing the new Midland Railway Study Centre for its opening in the Spring has been nothing short of remarkable. The main news is that almost all of our collections are not only back in the Silk Mill, but are shelved and ready for use.

To state the obvious, the pandemic has had untold negative impacts, often terribly and cruelly so, but there have been some minor benefits. In our case, despite our volunteers (even the normally indefatigable “Thursday Gang”) being largely confined-to-barracks, the temporary closure of the Museum and Art Gallery during the third lockdown has resulted in the Visitor Service Assistants being redeployed to the Silk Mill. This small but hard working band have been extremely helpful to us in getting the Study Centre ready and we are very grateful.

The Silk Mill itself remains a building site, and will be so for several more weeks to come. Consequently, in addition to the stringent Covid-safe working practices, hard hats, safety boots and hi-vis are required to work on site. All of which appear a little incongruous in the Study Centre, it has to be said, as it is looking more and more like, well, a Study Centre!

Nevertheless, great strides have been made during the month. Indeed, Tuesday 19th January marked a significant moment as the first “look-up” for an external enquirer was made from items located on the new shelves. All of which was an important test for the new shelf numbering scheme and the correct placement of the files & boxes.

Here are some more photos to give you a feel for how things are progressing ... 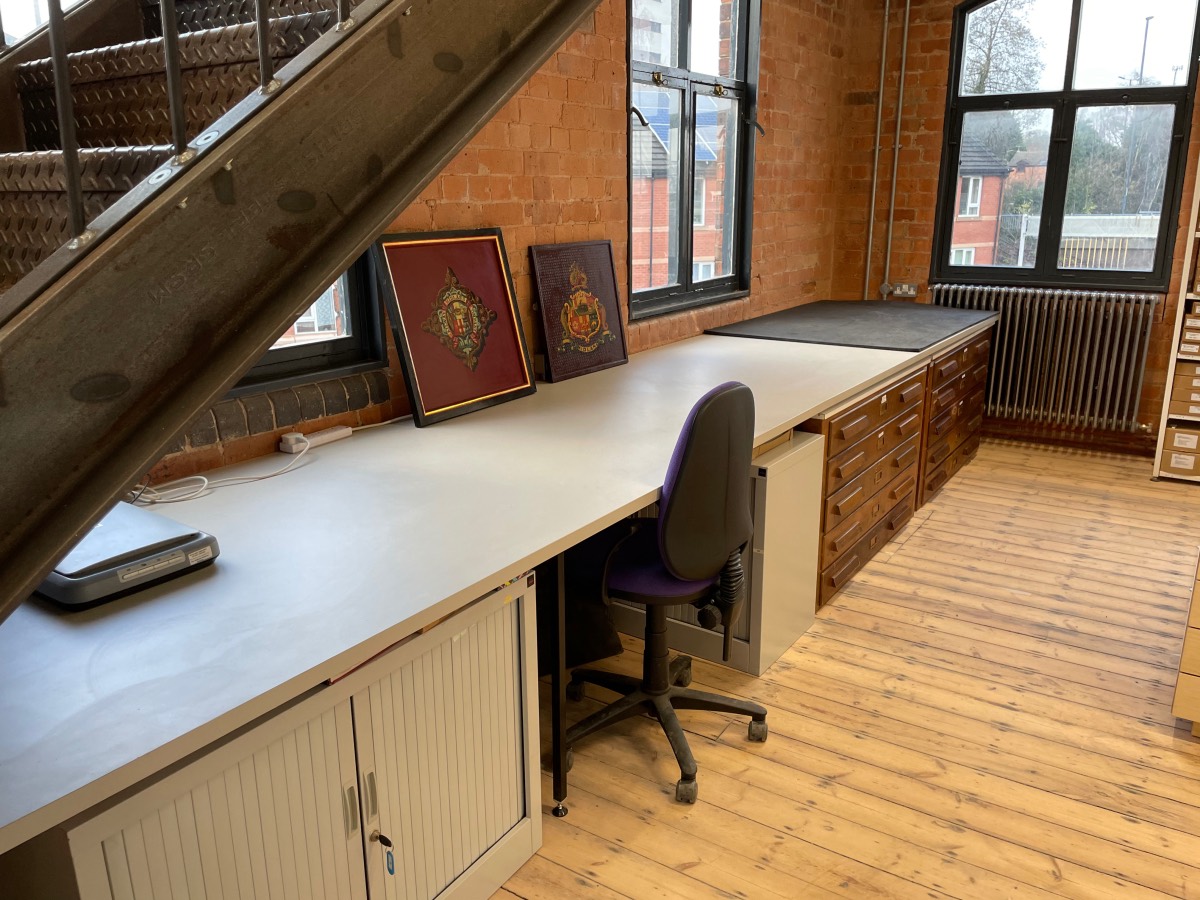 From a purely selfish point-of-view, here is one of my favourite spots in the building as it is where I will be spending a lot of time. This is the Cataloguer's workstation with its panoramic view over Sowter Road. The extra long work surface was specified so we can unroll the longest of plans, though I can think of at least one in the collection which will be too long even here! The Society's large format scanner is yet to be brought back into the building (this will hopefully be in the first week of February). Then it really will be “All Systems Go!”. 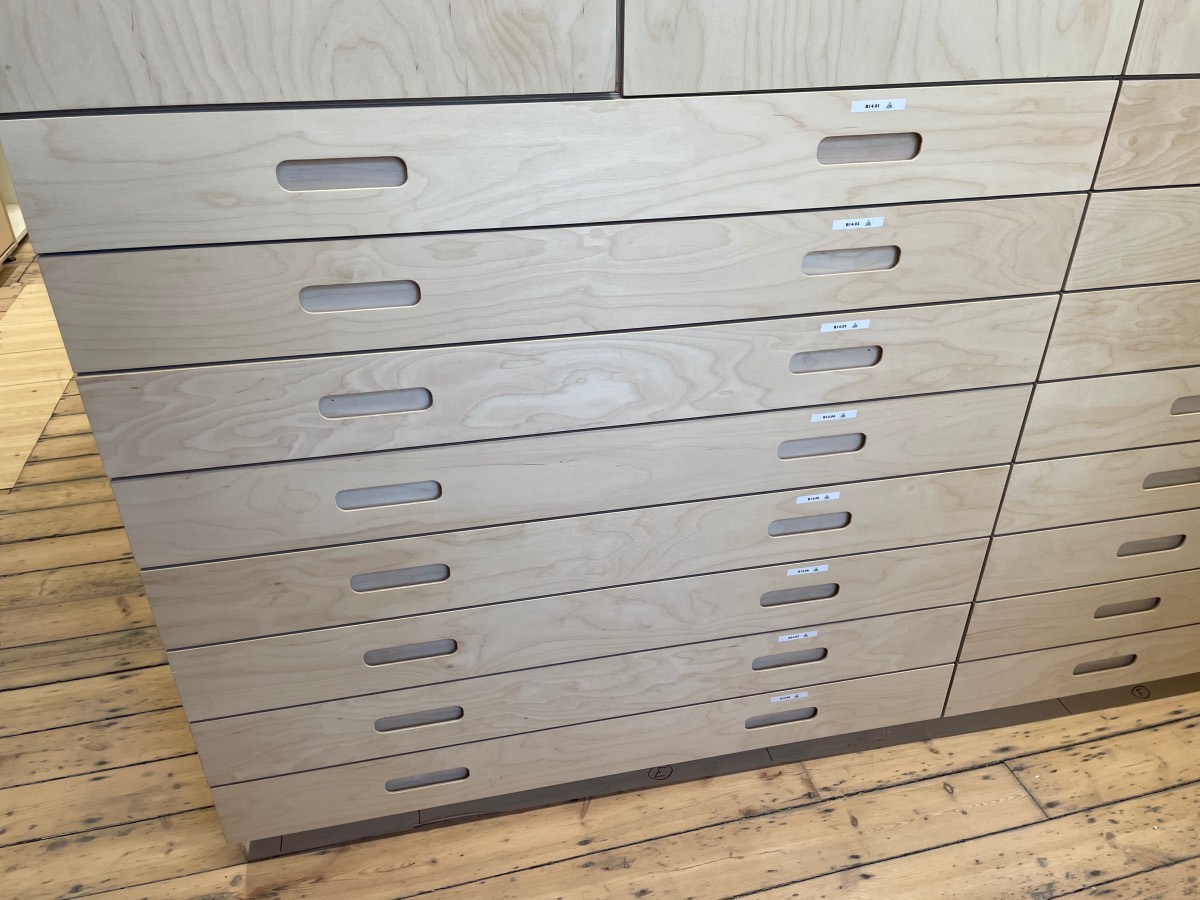 While four of the previously used plan chests have been retained in the new Study Centre, these new drawers crafted in the Museum's workshop are wider and deeper than their predecessors and as such much more practical for our many large plans. With modern runners, they are a sight easier to open and close too. 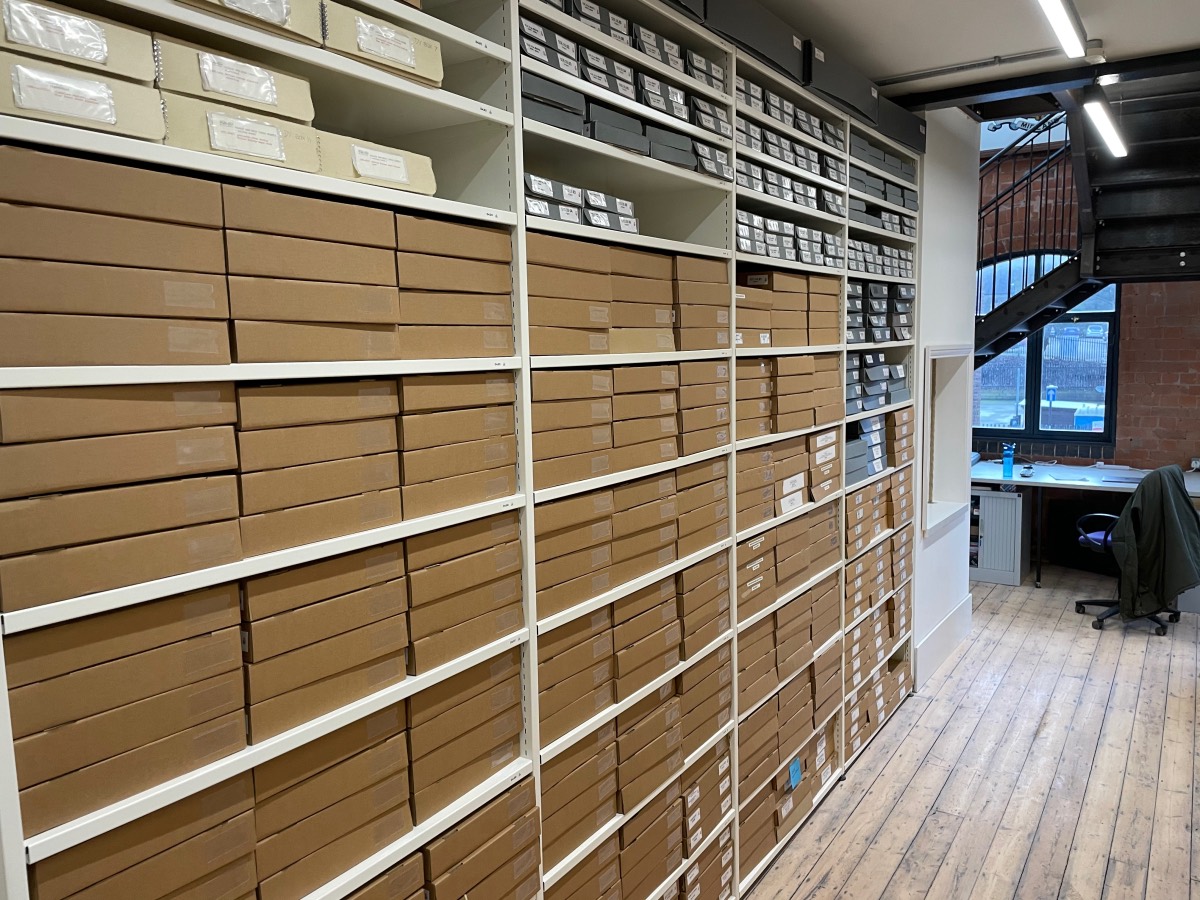 Next job on the To Do List is print new box labels to reflect the new numbering scheme. These “Med Tan” boxes were formerly stored with their long edge showing. Stored here with the short edge outwards, these will require new label sleeves as well. The dumbwaiter, visible at the far end of the 'D' aisle, was used for the first time this week as the John Alsop “stations collection” of copy postcards was transported up into the Reading Room. There, along with the Society's library, they will be on open access to all Study Centre visitors. 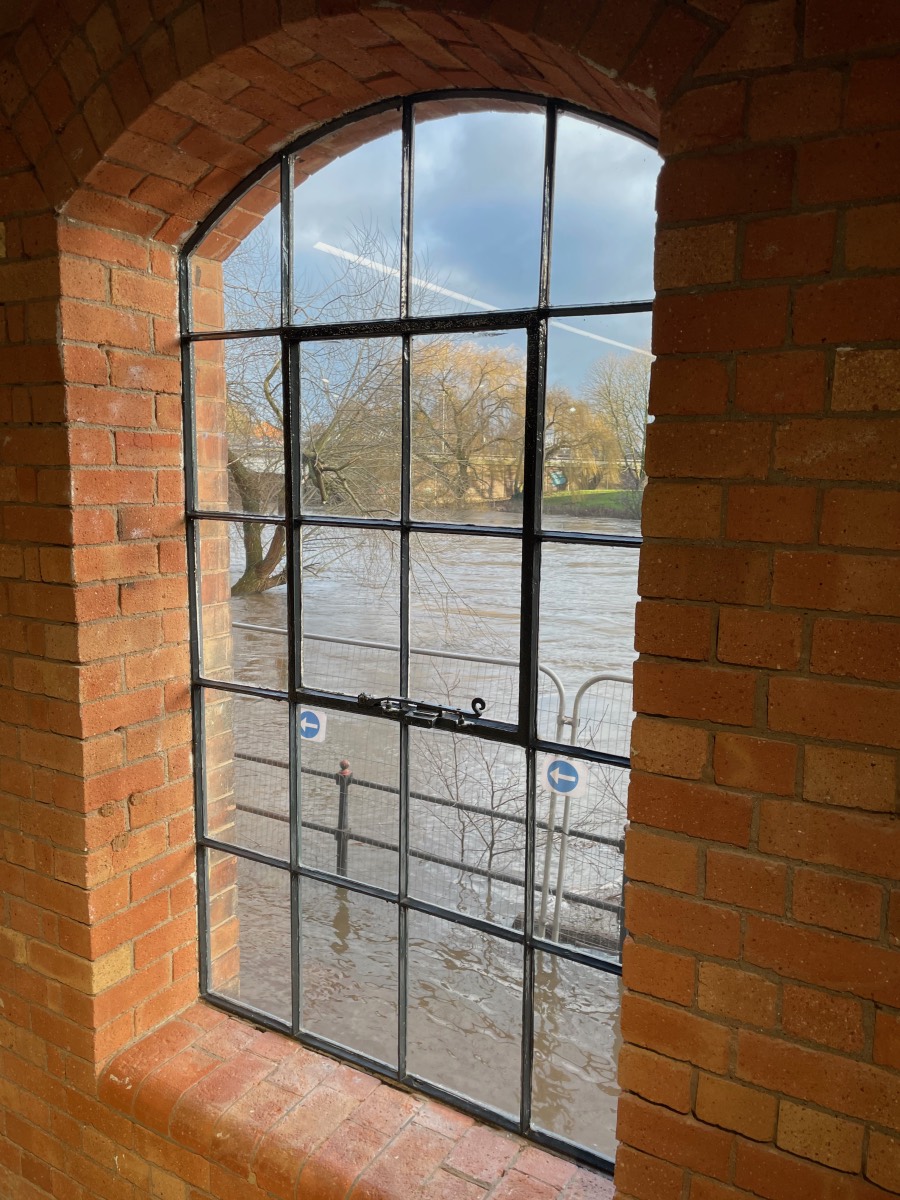 The Silk Mill will flood. That is an unavoidable fact and one which has been incorporated into the design of the Museum of Making. Sure enough, on 21st January there was minor water ingress (seeping up through the floor) as the River Derwent peaked, but no lasting harm. From our point of view, all our collections are on the first floor. While we are not complacent about the many potential sources of disaster (which are mitigated-against as much as is practical) we can be confident that Derwent flood water won't be one of them. 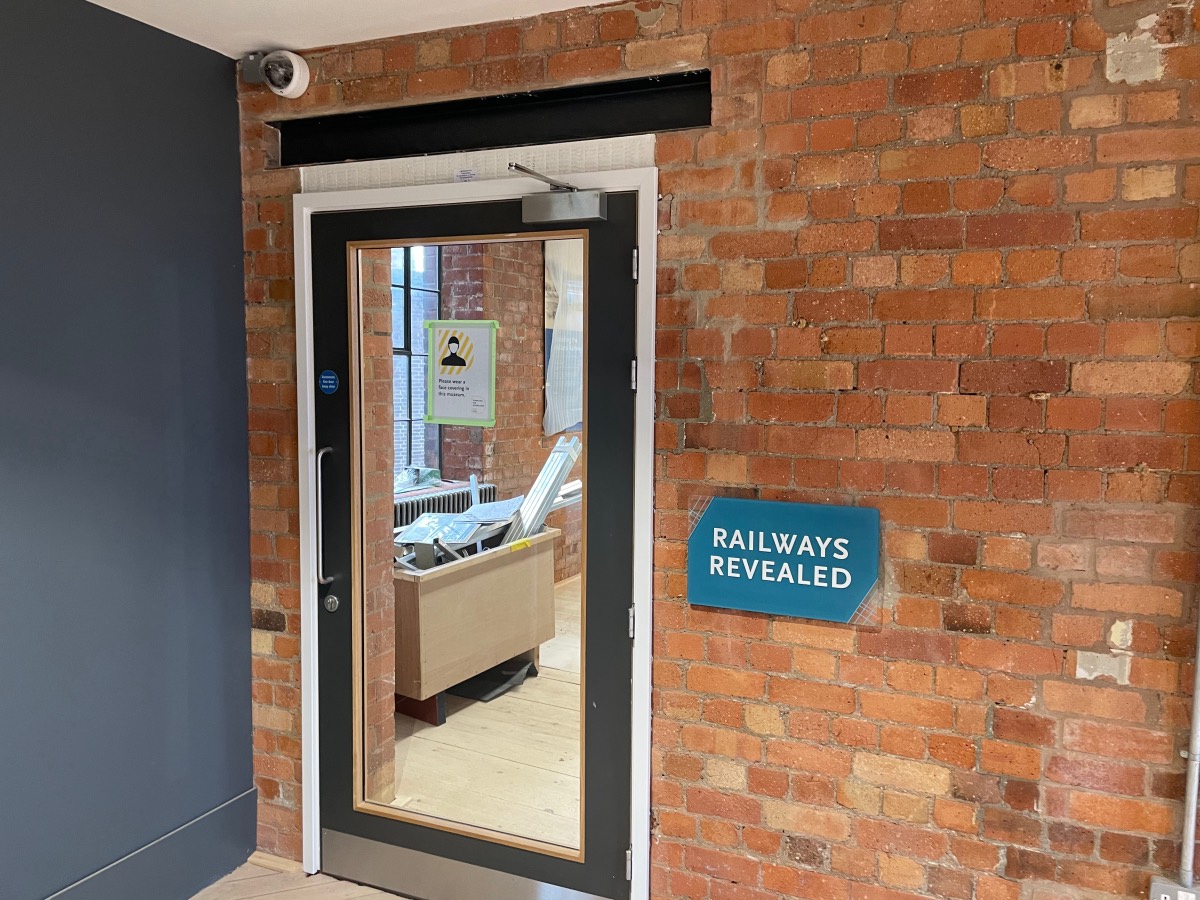 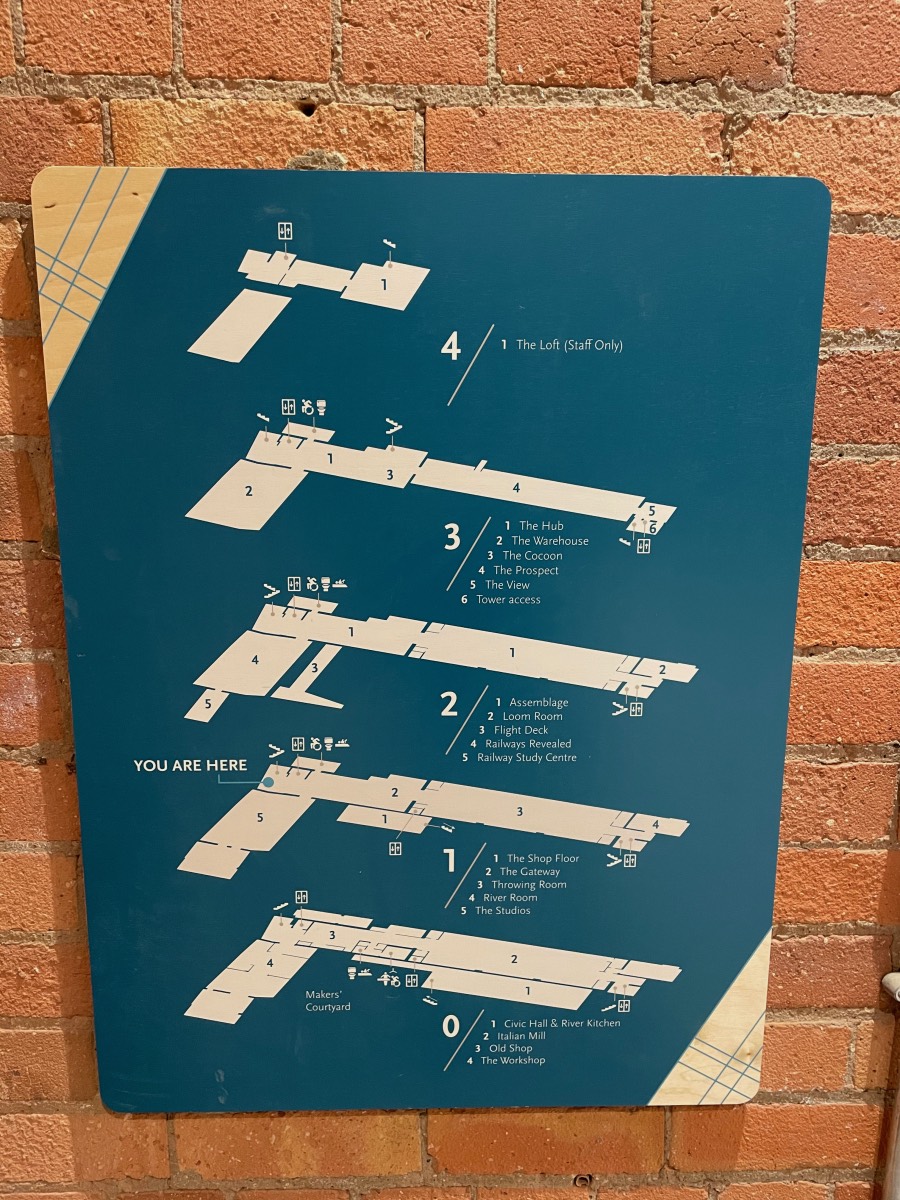 One of the most visually striking changes during January has been the progressive installation of signage for visitors. Railways Revealed is the gallery that contains both the model railway and the interpretation panels and displays explaining the importance of railways — principally the Midland Railway, naturally! — to the town & city of Derby. This is also the route visitors to the Study Centre will take. The floor plans (as well as looking vaguely like an arsenal of firearms from a distance!) are very useful in orienting one's self. Clicking/tapping this image will open a larger version in a new tab/window for study if you would care to do so. 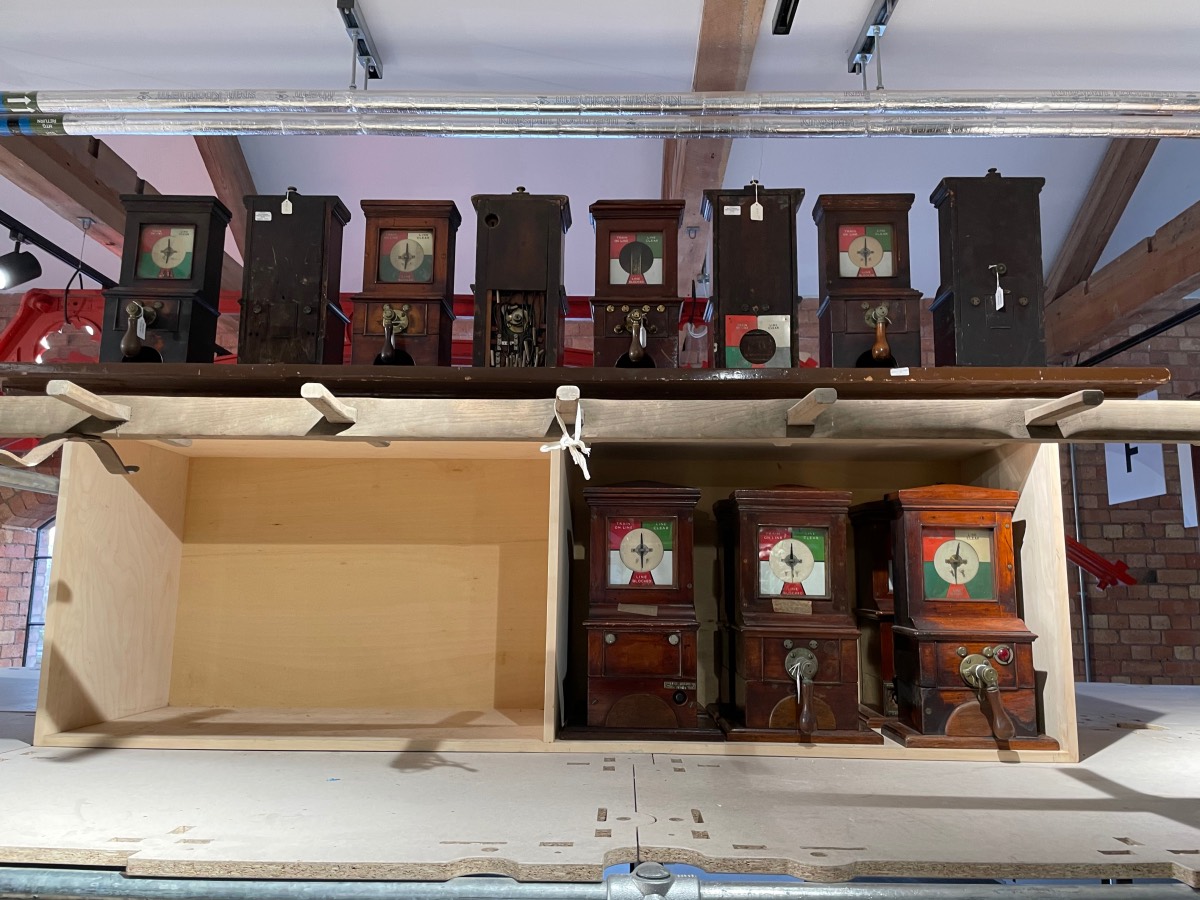 This small part of The Assemblage vividly captures the nature of the second floor of the Museum of Making. Here the Museum's representative collection of Midland Railway block instruments are visible, ingeniously located on top of a signal box block shelf. Unfortunately only visitors of seven feet or more in stature are likely to be able to appreciate this! 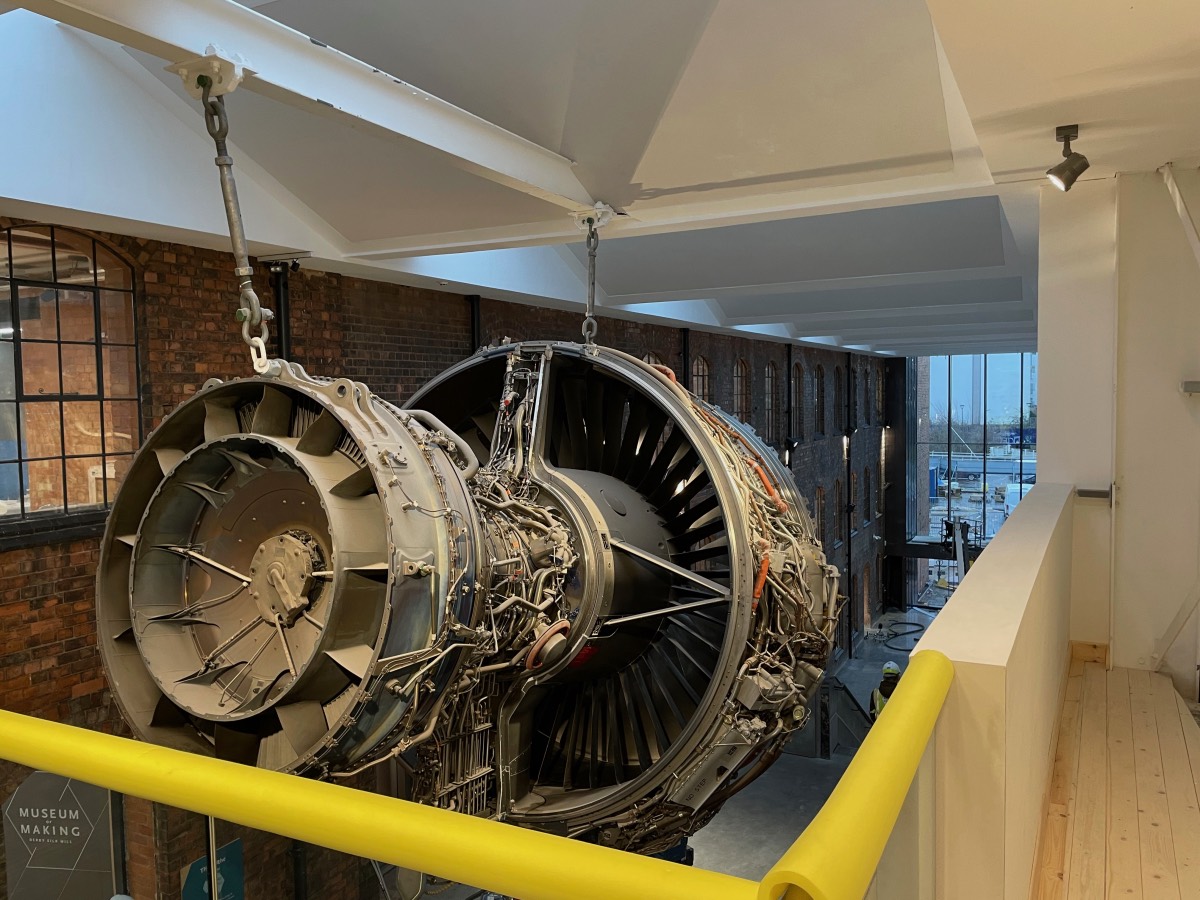 No tour of the new Museum of Making would be complete without a peek into the Civic Hall and a look down upon the Rolls-Royce Trent1000 turbofan jet engine. As if displaying it suspended from the ceiling for visitors entering the building to walk underneath wasn't inspired enough, doing so with its inner workings exposed is the icing on the cake. This photograph is taken from a narrow catwalk, aptly called the Flight Deck, which has been created to allow this incredible view from above. 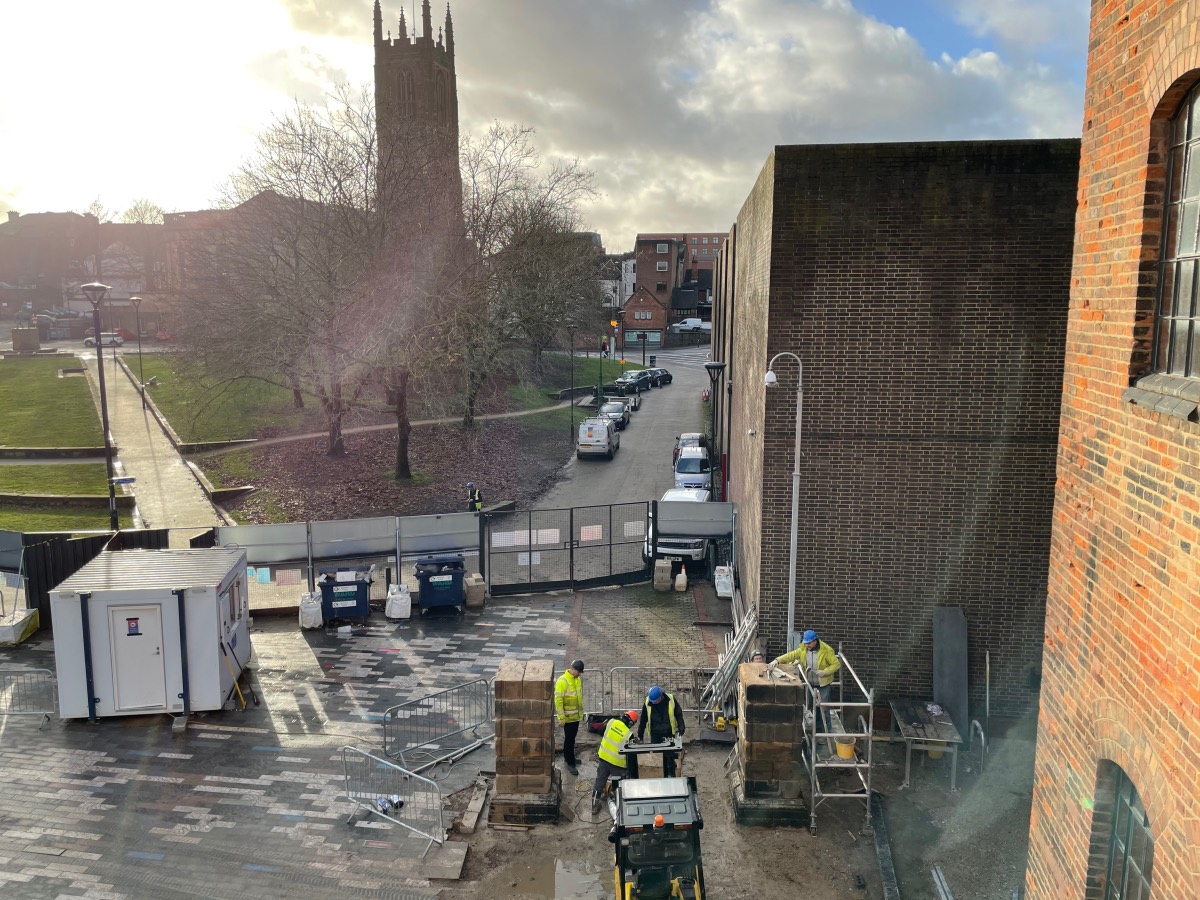 Our final view of this tour allows us to check on progress in re-erecting the Bakewell Gates in their former position where Silk Mill Lane once let out into the curtilage of the mill and the narrow bridge over the mill fleam. Meanwhile work is progressing front and rear of the building to restore the stone cobbles and paving.

I hope you have enjoyed the latest update on progress to reopen the Midland Railway Study Centre. The Museum of Making continues to come to life before our very eyes and is on-track for a reopening some time this Spring.

You can read the previous updates as well if you are interested:-