Visitors to the old Midland Railway Study Centre could not have failed to notice the Bradford Mirror as it dominated the reading room. Indeed, the wall upon which it was mounted was specially constructed for the purpose when the old Study Centre was formed in 2004. When the Silk Mill was emptied in February 2018 for the major renovation and transformation into the Museum of Making, the mirror was very carefully packed away in a bespoke crate and placed into store. 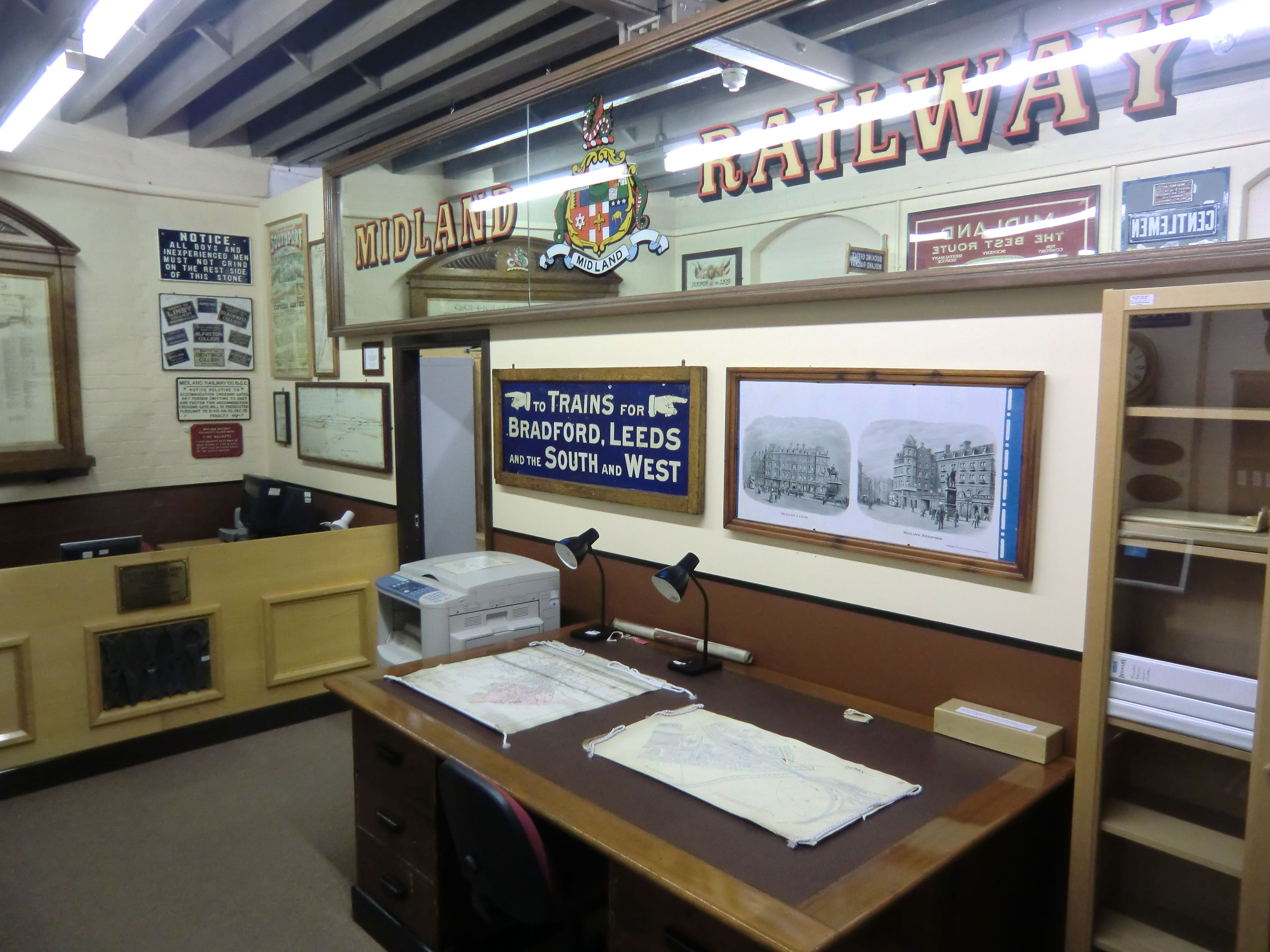 It was very difficult to record a good photograph of the mirror in its former position due to its sheer scale and the limited size of the room it occupied.

Thursday 17th December 2020 saw the emergence of the Bradford Mirror from its long hibernation and the return to a position of glory, dominating the Midland Railway Study Centre once again.

We have Mr. Brian Jackson of British Columbia to thank for the mirror being at Derby. He placed it on long term loan to the Roy F Burrows Collection, now looked after by the Midland Railway Society, and as such it became the centrepiece of the former Midland Railway Study Centre reading room. Beyond that its history is somewhat of a mystery. We know that it came from Bradford and that it was clearly originally mounted behind a bar. We assume that this would have been the famed Midland Hotel at Bradford, but it could just as likely have been from the Refreshment Room on the station. To date, photographic evidence confirming or negating either location hasn't surfaced.

Either way, once the Midland Railway was consigned to history and the LMS Railway took over, its usefulness was over. We are told that it spent many years wrapped in sacking stored in someone's shed before being discovered and saved for posterity. That being so, it is in remarkably good condition with only a small area of mottling to the backing.

The mirror itself is in two parts, which was a considerable blessing to the team having to handle it this week as its overall width is 18 feet (5.5 metres)! The frame is modern, constructed specially for it by Roger, the superb craftsman & joiner of the former Derby Industrial Museum in 2004.

The mirror contains a small enigma, a little joke perhaps, perpetrated by the highly skilled sign writer who created it. Here is a copy of the Midland Railway “1907 armorial device” as it appears on the mirror. See if you can spot what's wrong with it. The answer is at the bottom of the page... 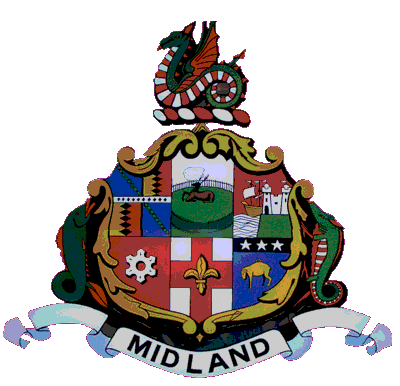 (You'll notice, of course, that this is the same version we use extensively on this site!)

The following sequence of photographs document the re-installation of the Bradford Mirror into the Midland Railway Study Centre, with the skilled team of artisans assembled by Core Design — the creatives behind much of the Museum of Making — doing the actual hard work! 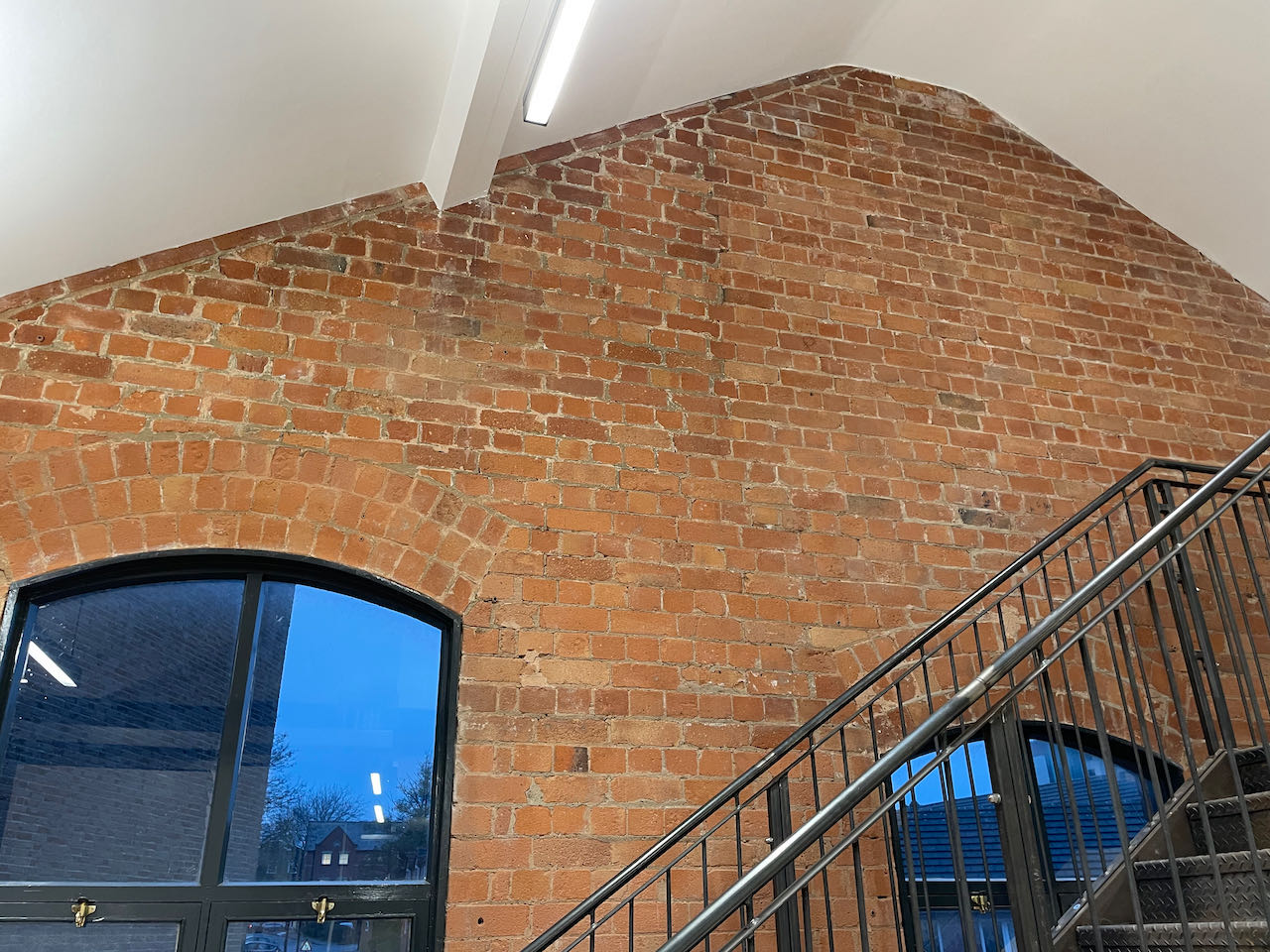 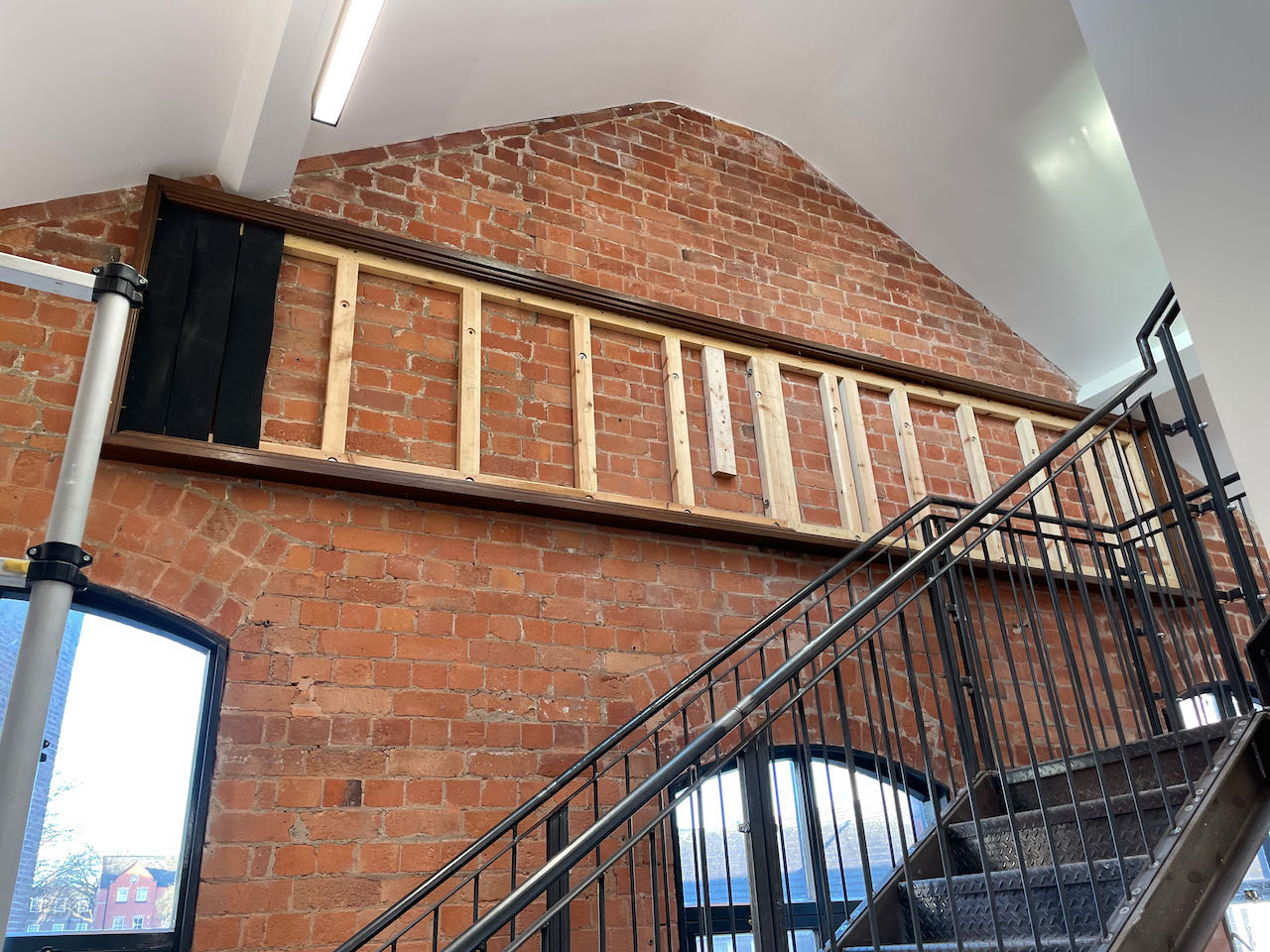 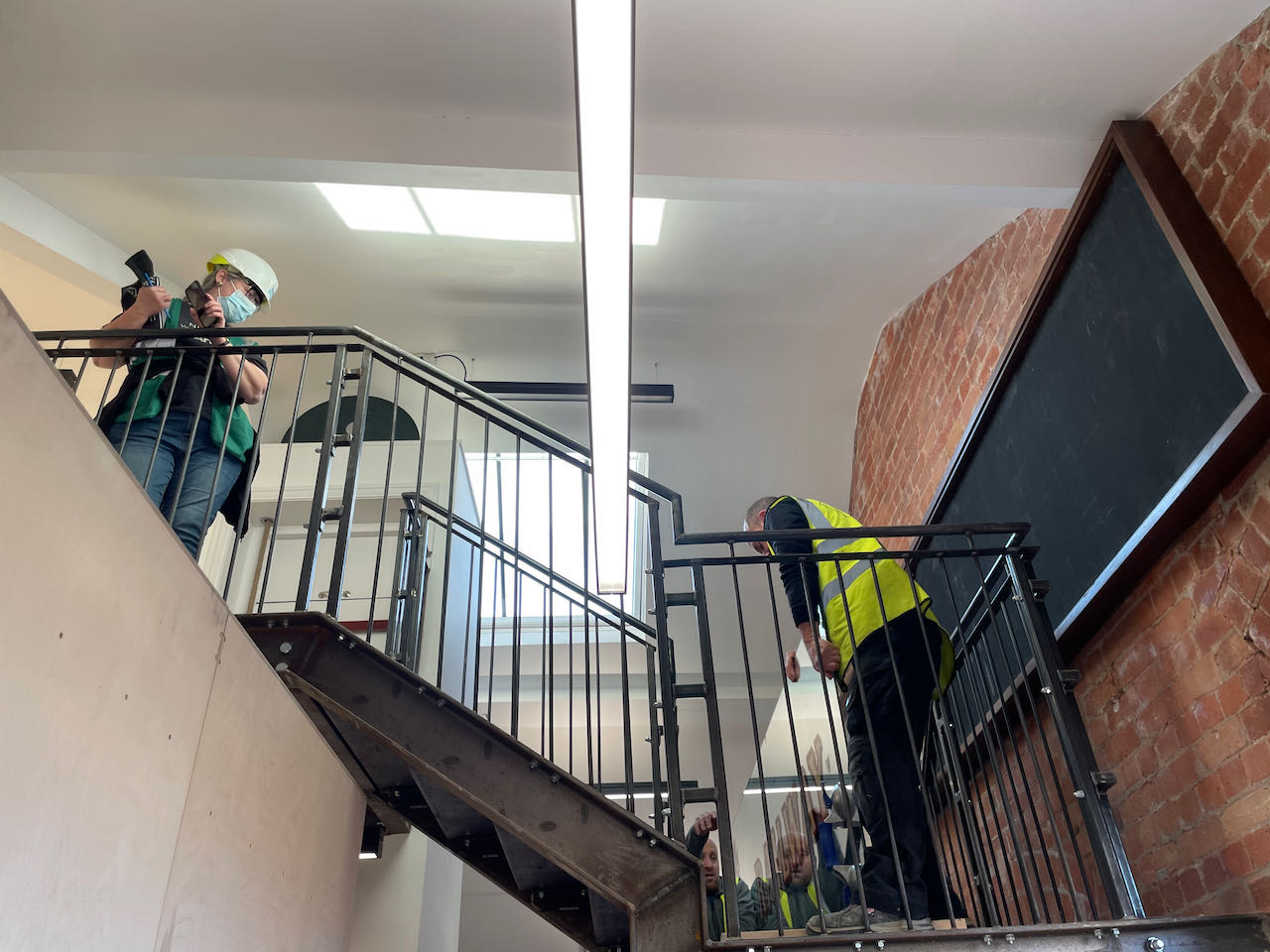 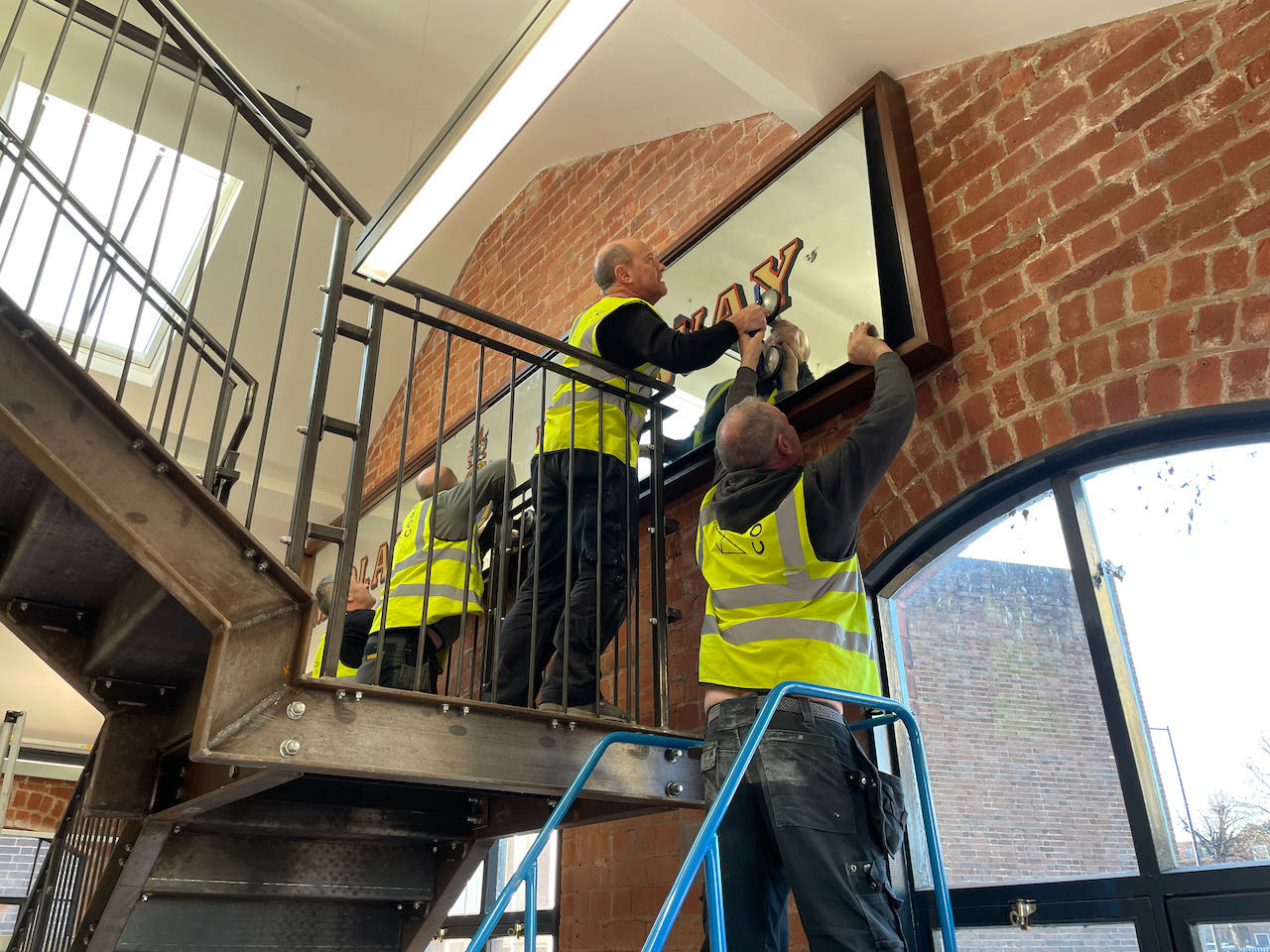 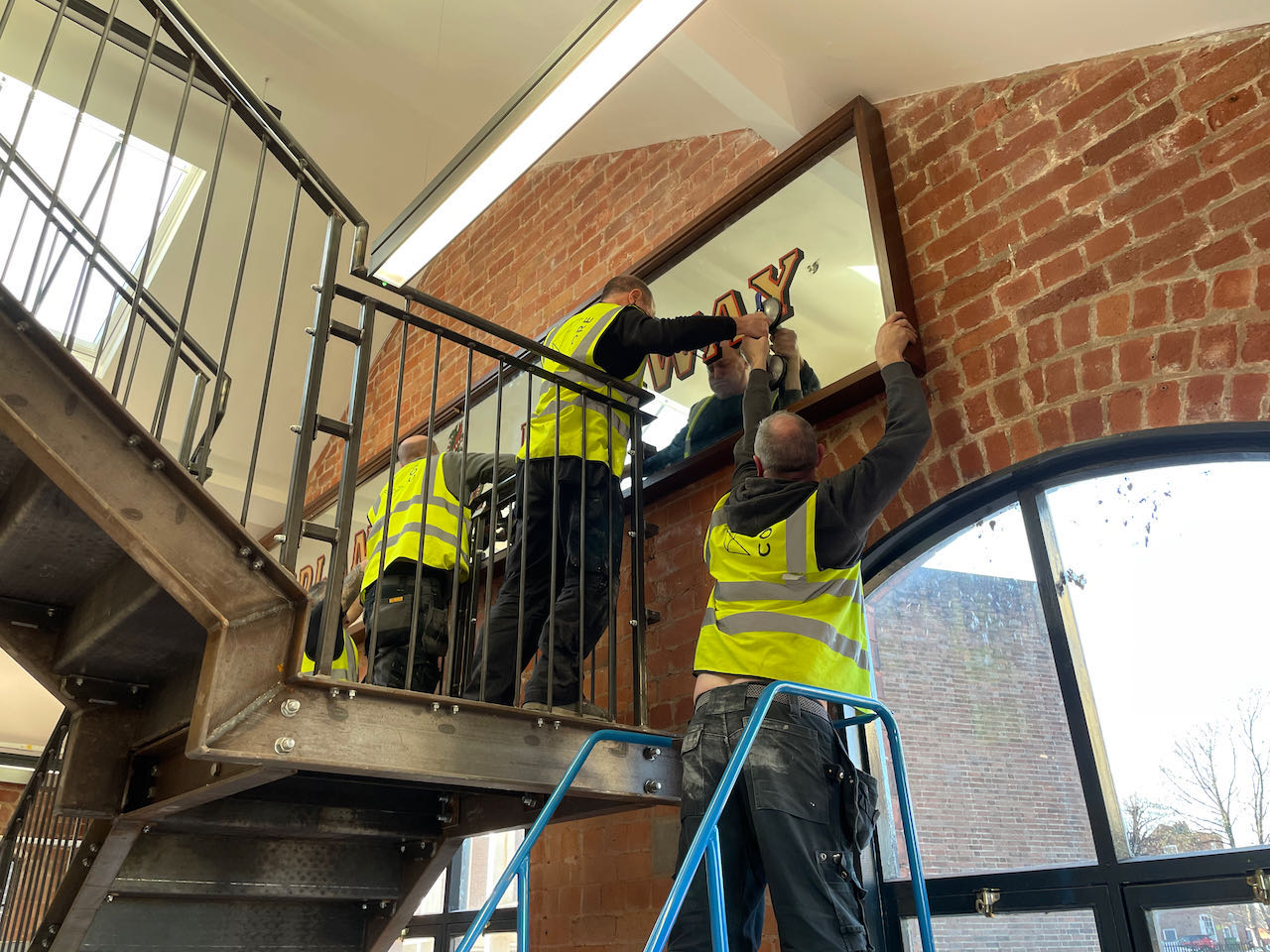 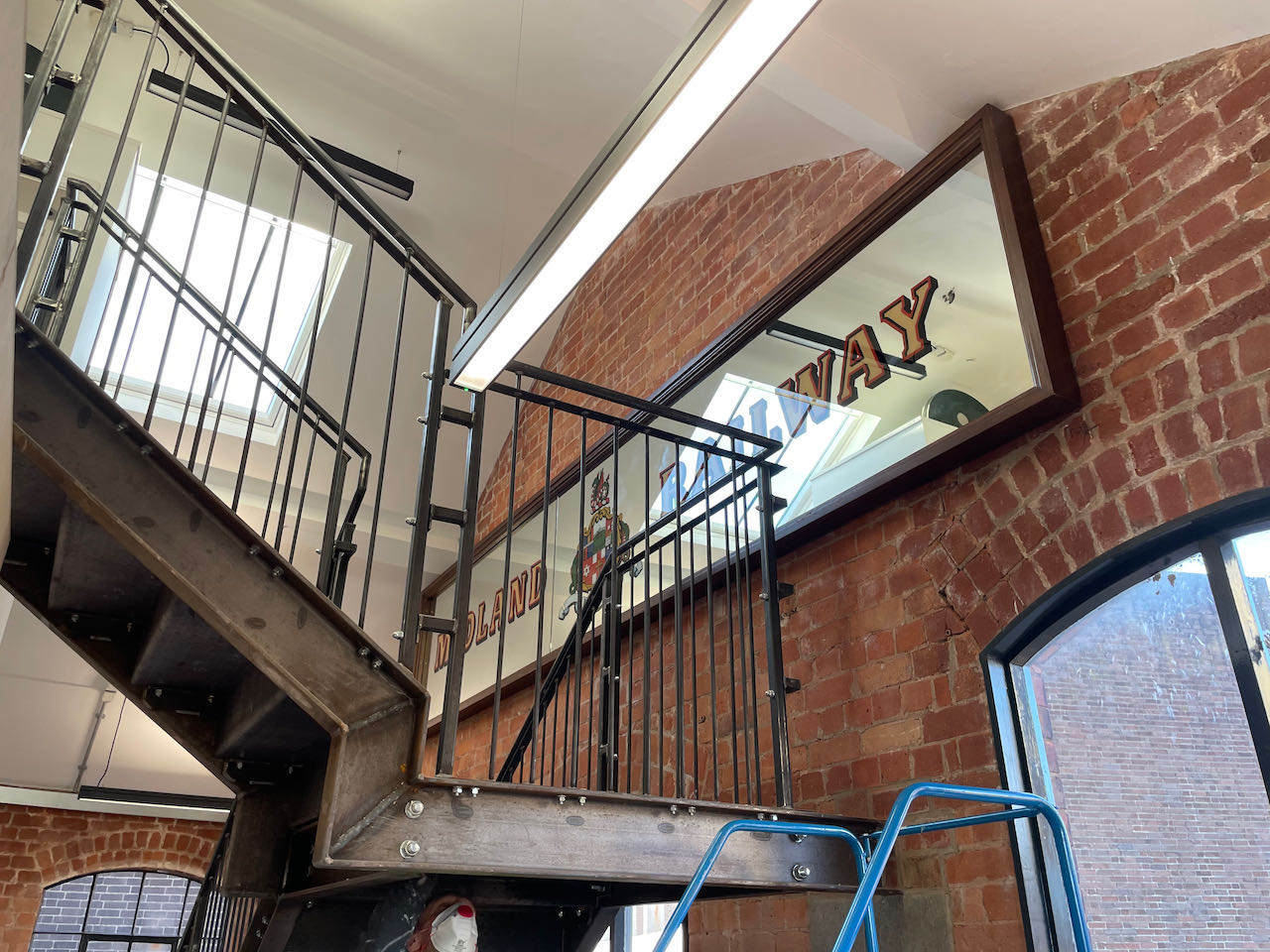 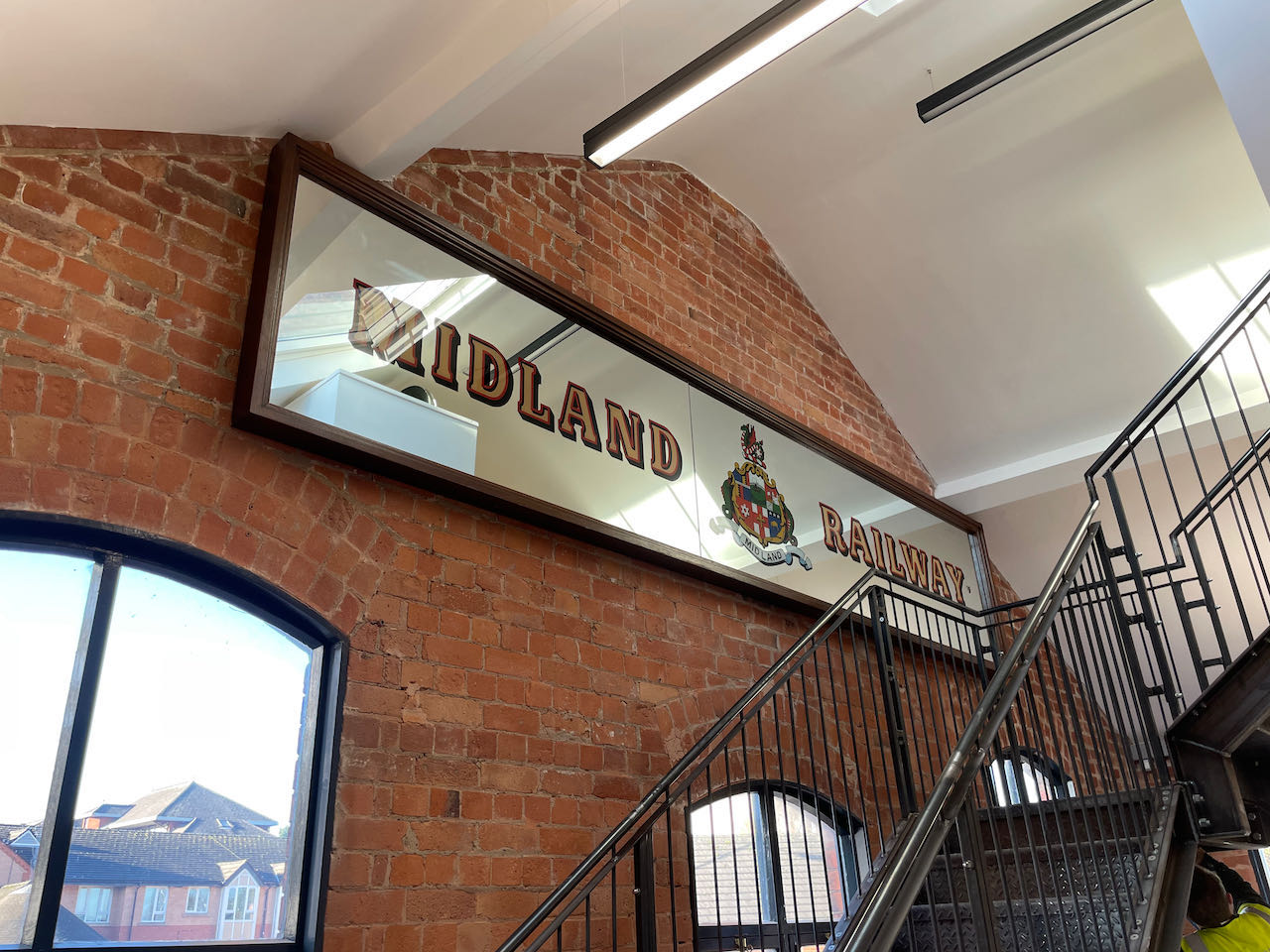 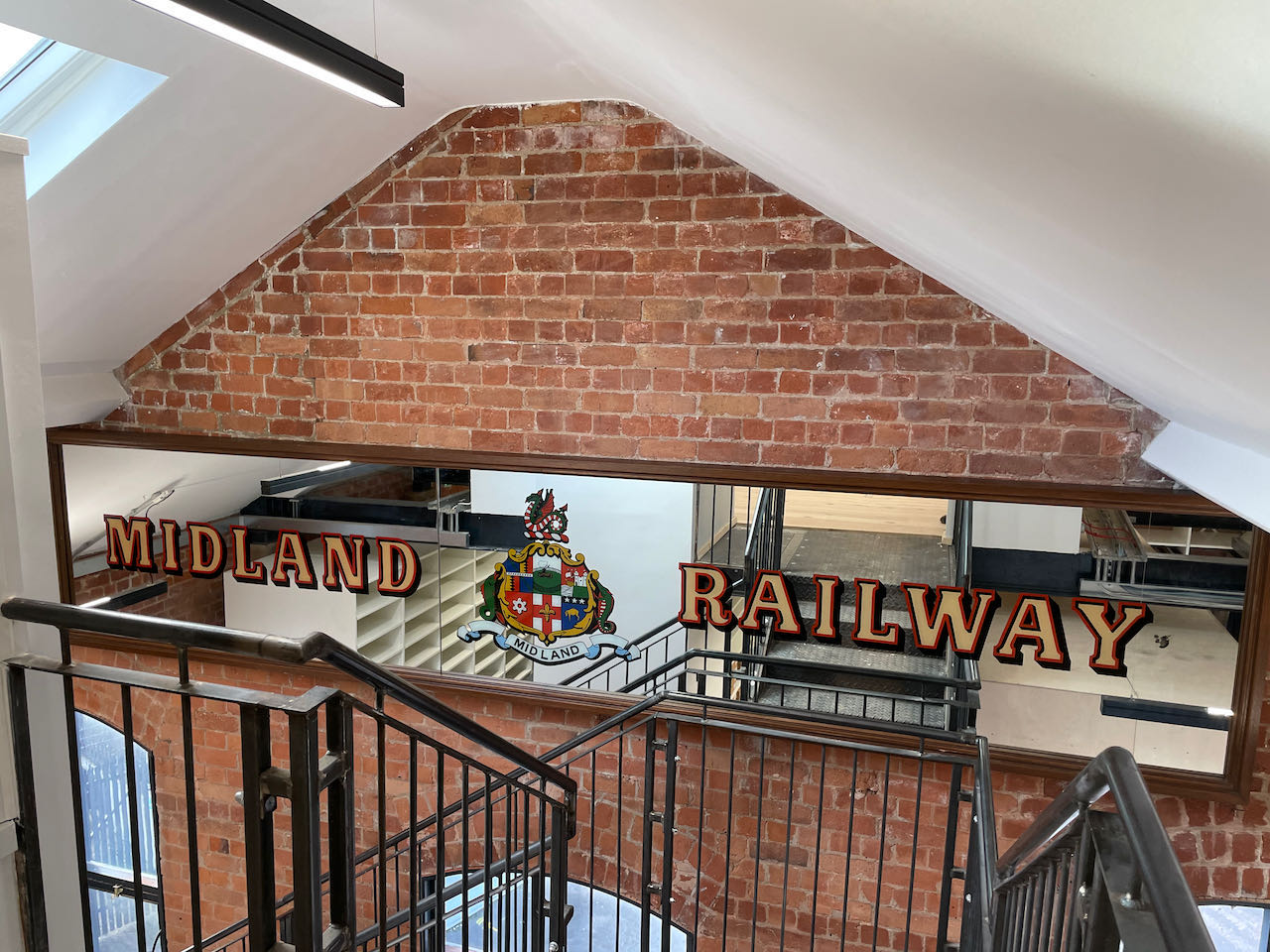 Did you spot what is wrong with the armorial device?

Perhaps we ought to start with why we don't call it a coat of arms... To be able to use that term, the design must be registered with the College of Heraldry, which the Midland never did. In fact, the only pre-grouping railway company to do so was the Great Central. Having got that out of the way, back to the point... The Midland's design incorporates a variant of the coats of arms of six of the principal places it served. Clockwise from the top left, these are; Birmingham, Derby, Bristol, Leeds, Lincoln, and Leicester. Lincoln is something of a mystery as it was hardly a principal destination and it is absent from the Company Seal, which otherwise follows the same design. The absence of London is largely explained by fact that it was a relatively late (if rather important!) addition to the company's network of lines.

To spot the deliberate mistake (and surely it had to have been deliberate), we need to look at the Leicester part. The Coat of Arms of the City of Leicester is formed largely of a “cinquefoil”. Think back to your French lessons at school and you may recall that cinque means five. Look closely at the mirror and you'll spot that this version of the Leicester arms has six points!

Credit for spotting this goes to a visitor to the Study Centre several years ago. Being actively involved in the restoration of vintage coaching stock, he immediately noticed the addition of a sixth point.

The question has to be asked; Why? Or How? Although clearly somewhat stylised and simplified for the job in hand, whoever painted the lettering and the armorial device on the mirror was without doubt a talented individual. Even if copying from something, it seems unlikely they would get this detail incorrect by accident. All we can do at this distance in time, however, is speculate.

If you did spot the mistake, then very well done — but no prizes, I'm afraid!