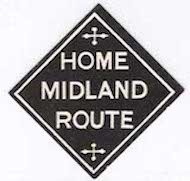 This dataset covers 105 officers, supervisors and clerks employed in the Midland Railway Signal Department in April 1922, with additions and alterations to July 1923, by which time they were part of the London, Midland & Scottish Railway organisation. Most were based at the Company’s headquarters at Derby, with a reasonable number outbased at other locations.

The information had been initially typed onto Kalamazoo forms, some of which were carbon copies, and photocopied in later years using an early type of glossy foolscap paper. As a consequence, some of the detail is unclear. However, every effort has been made to produce accurate information, in some instances cross-referencing with other records.

As with many Midland Railway records, initials rather than forenames were used on the forms. However, in certain cases forenames are known from other research and these have been included in the transcriptions.

Abbreviations used in the “Grades” column are:

The vast majority of employees were paid a salary – the figures being expressed as annual amounts, although a few were paid a weekly wage. The different types of figures should be obvious.

Maximum salaries for Clerks and Supervisors

Special Class = varied, depending on responsibility / experience required for the post.

No-one went straight to top rate for the grade. They usually started on the lowest rate and received annual increments until they reached the maximum.

The Class 5 scale was based on age, with small increments being paid annually. If a person remained on this grade he / she would not reach their maximum until their early 30s.

Reasons for these are not recorded. With juniors this was probably a lodging allowance for those working away from their homes. Other allowances could have been for ‘on call’ duties, although it is noticeable that most of these ceased to be paid from July 1922.

DES = Date entered service (i.e. when first employed – which could have been in a different department / at a different location). The exact reasons why there are two dates of entering service for odd employees is not known, but it is possible that the first one related to employment in another department, which would not be taken into account for advancement within the Signal Department.

[Entries in square brackets cover information not included in the original document.]