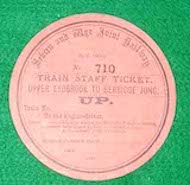 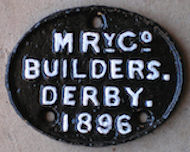 First-hand accounts by Midland Railway employees are very rare. While old railwaymen always seem to need some coaxing in order to get their stores out of them, once they start, however, those stories are invariably fascinating. We are very grateful, therefore, that one employee of the Midland Railway was persuaded to write down some of his memories of the Company and his career. This takes the form of eight pages of A5 manuscript (our reference RFBMCT01234) written by Mr. Hickmott at his home in Tewksbury, some time before his sad passing in 1984. The original eight pages of manuscript can be downloaded as a 2.2Mb pdf. We are grateful to Midland Railway Society member Micheal Shaw for transcribing Mr. Hickmott's notes.

John Arthur Hickmott was born in 1889 in Highgate, London. He started his railway career in June 1905 with the Midland Railway at Bitton. Thereafter, he worked at Clifton Down, Nailsworth, Fishponds, Montpelier (1914), Tewkesbury and, in 1916, moved to Defford where he stayed for 31 years. He assisted at Evesham for a short time and, in 1947, went back to Tewkesbury as chief clerk in the Goods Office and retired in December 1949.

Went to Bristol when I was 2 & attended 3 schools there where I passed an examination for the Q. E. H. school at Clifton for 5 years. When I left in 1904 I made several applications for jobs but was not successful so dad said I would have to go on the railway (the old Midland)

I passed an examination in Baldwin St Bristol & started working at BITTON Station near Bath on June 17th 1905.

While I was there I lodged at Mrs Lovell's shop at Oldlands Common & the Station Master was very strict as I only had 1 hour for dinner (26 min there & back) & if you were a few minutes late you got a rap on the knuckles with his ruler.

I used to issue the tickets for the trains which used to run to Clifton Down & St Philips Stations and collect the tickets from passengers coming of the trains.

The tickets were punched on the old press which had to be altered every morning. I also had to weigh the coal across the yard (which is now defunct)

While I was at Bitton I purchased an old fashioned fixed wheel bike with solid rubber tyres and it saved me a lot of walking. I also used to go home to Westerleigh when it was my weekend off.

I also remember the old Railroad where the coal from the colliery I think it was the old Kings??? Colliery for the coal to be taken down to the River near Kelston.

I was supplied with a uniform thin in the summer & thick in the winter but they did not supply Boots which I had to buy & to save money I used to have Hob nails put on by a chap who made the Boots.

When I went by train home I travelled to Mangotsfield & walked up the line to Westerleigh. Sometimes I got a lift on a train standing at North Junction where the trains for Bristol & Bath were diverted I also remember seeing the Pines Express (Manchester to Bournemouth) running through the station each day.

Besides all the Local trains of which there were plenty to keep you busy in addition to keeping the passenger ???? correctly I used to do the Goods invoicing. We had a Horse Dray from Warmly to goto the paper Mills for a consignment for London also to go to the Poly??? Works at Keynsham for a load for Birmingham.

There were two shifts 12 hours each 7am – 7pm & 10am – 10pm I used to have the Porter on my shift & we used to brew some tea. I recollect that one day I brewed up the tea in the can & while I was swinging it up and down the SM's lad came round the corner & bumped into it it made quite a mess & the son didn't half choke me off for not looking where I was going.

I now recollect my standing on the steps of the S Box & seeing a very bad thunderstorm over at Bath.

While I was at Bitton I went out with a young lady from the Common but ??? I went back some time after I found she had injured her spine on falling from a swing so that was all over so far as that courting was done.

I was there about 2 years when I was transferred to Clifton Down where they had a Midland & Western separate Booking office & where I lodged with a policeman but not for long for I was moved again to Nailsworth where the Clerk ??? to join the army abut 1907 & I worked in the Goods office also in lodgings on the corner of the Bristol & Bath roads where I joined the Church Lads Brigade & was Bugler for a time & where me and my mate B Gardner bought a new bike (a Sunbeam) apiece & we used to go all over the place on them & it was there I purchased my first pipe & tobacco. I think that the pipe was 1/6 & the baccy 11½d they used to weigh it on the scales & wrap it in some paper & after 74 years of smoking a pipe (not the same one) I had to give it up owing to my recent illness I'm not sorry about it as it saves me some money.

While I was at Nailsworth I practised learned to use the telegraph needle instrument & which came into use later on when I was removed elsewhere.

When I was at Nailsworth I used bike home to Westerleigh & one night my lamp failed it used to be the old fashioned carbine sort of lamp & I walked about a mile & when I lit it again I biked all the way home & didn't see a soul.

At the lodging I was at as they didn't have a Bath Room they used the old tin bath so that me & my mate had to bike to Stroud for a bath. I remember the other lodger ( a Mr ????? ) had a Fish Hatchery up on the Bristol Road.

Once a month I used to go to Minchinamptin across the Common to fetch an account from Philip the Grocer & it was not very nice in winter. I used to go home once a month by train to Yate & walk the rest home

Well so much for Nailsworth when they moved me to Fishponds ?? Bristol where I worked in the Goods office and it was my job to receive & send the different messages from the staff of the station I being the only one who could read the telegraph without at same as there were two pieces of tin screwed on each side one high & one low.

There was also the Pottery & the Avonside Engine works where one of engines at Bitton comes from. I will tell you about that later on.

Well they moved me from Fishponds to Montpelier in 1914 where I got married in the September & where there were two booking racks one Midland & one Western & I didn't we do some booking all over the place. I remember seeing the special trains taking the troops to Southampton into France. I remember it so well as some of my pals went. While I was at Montpelier I had to pass an examination for 60 £ per annum I passed in the passenger side but failed in the goods side so they sent me to Tewksbury to learn the goods work.

I lived in Gravel Walk & afterwards moved to Cotswold Garden where I took my eldest son who was born on Gravel Walk on June 25th 1915.

In those days the trains came & went via Ashchurch to Tewkesbury & Malvern through Ripple & Upton on Severn which alas is now all closed. I remember the horses used to go down to the Healeys Mill & Rices Martins to fetch the vans up to the station. Whilst I was at Tewkesbury there were two Booking clerks & 3 Goods clerks as it was very busy in those days. I remember going in a boat ith some friends up the River Avon. (More about Tewkesbury later on)

I used to do my work in the machine House in addition to weighing the coal for the Coal Merchants. Otherwise I didnt get about a lot as I had the family to see to.

While I was there they wanted a clerk at Defford [in] 1916 in place of F. Brooks who had to go into the army so I moved again this time to Eckington as I couldnt find a house at Defford where I worked for 31 years up & down on my bike all winds & weather of course it was. Was temp but the Company wouldnt release me so I stayed as I said for 31 years during which time I joined the RAOB in 1926 and was Secretary for 18 years & can still ...

It was while I was at Defford that they made the change in Jan 1923 to form the 4 Regions (LMS LNE Southern & Western). It was very busy station the Carting Agent M. Spiers & Sons hauling the produce from both the Corp & Central Markets and when the 2nd war broke out they constructed some Hangers on Defford Common as the RAF flew the planes from there. We had a bit of a job as we only had the two sidings & had to cope with this in addition to all the fruit & vegetables from the markets.

The traffic was all horse drawn in those days but Spiers took to the motor lorries & that made it a bit easier but we thought of nothing working up to 12 hrs per day on at 7.30am & off when finished as it was no use leaving anything till the next day.

Every other week I had to come on duty on Sundays with four or five trains to attend to on my own as the Signal Box was shut & the Boss was away. I remember being on my own on one winter's day. I used to warm myself at the fire by the crane & nearly missed my dinner. Pretty hard work having to do the two jobs (Booking & Goods) but after a while they let me have a lady clerk to ease matters & it was when she was efficient that they wanted some assistance in the Goods office at Evesham so they sent me there along with 3 others as their accounts were behind but between us we put it right and while I was at Evesham in that cold winter of 1947 then I heard of a job at Tewkesbury with a rise to class 4 & I immediately took it travelling by train to & fro from Eckington to Tewkesbury. Well I had a busy time there as Chief clerk in the Goods office along with 3 more clerks one of whom I contacted during my stay in hospital recently. He is still working at Gloucester. Well all things come to an end so when I heard of the Western taking over from the LMS Southern Sector I decided that after nearly 45 years it was time to pack it in on Dec 1949. I missed my watch by about 5 months but I received a very nice letter from the Goods Manager and I am also still drawing my pension about £119 per month. So what with my OAP pension I ain't doing too bad. Well in 1965 I lost my wife & have been living with my daughter for the past 18 years.